I met my first guy from Happn, the dating app for stalkers and amateur detectives We had some enjoyable banter but it died out and he wasn’t making any other moves so, with that plus my only checking the app every few days, meant fizzle in my mind.

Went on a few days later to see a heated message from him about “exchanging a sentence or two every 24 hours doesn’t do it for me so let me know if you want to have an ACTUAL conversation.”

Here’s a selection of the sentences he was offering up:

The all caps in his message really burned my cookies, so obviously I clapped back about how normally you ask for a phone number or a date or something else after a week of messages.

His response, get this, was “most ladies aren’t too comfortable giving out their number so I didn’t think it was appropriate to ask. Relax.”

So it’s appropriate to get all snarky if I don’t respond to your liking but you can’t man up to ask for a number?

He continues to be dumb but then apologizes and asks to start over. Given he lives in the neighborhood and has a cute dog, I acquiesce.

No good deed goes unpunished because now the boring messages go from the dating app to texts. And extend from boring to creepy. I got another “what are you doing” around 11pm and said going to bed and he responded “stay and play,” which I ignored. (Am I missing a world where people over 21 are dressed to go out at 11pm on a Tuesday just in case?)

When I responded in the morning, this ensued 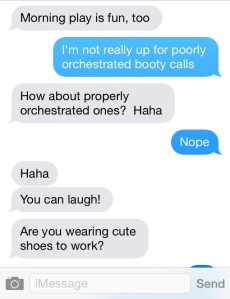 What the ever living eff.

I honestly just was baffled and asked his end game. Still apparently just wanting to get to know me…